I would like to thank the many who helped me with this research. 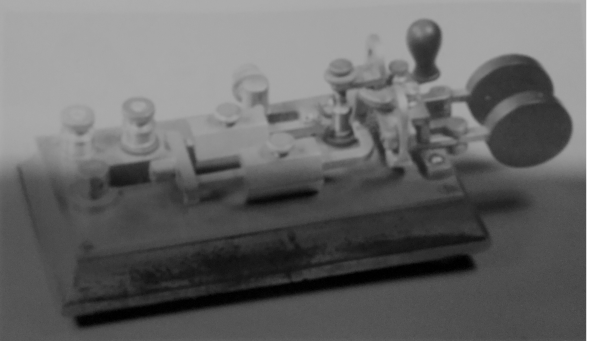 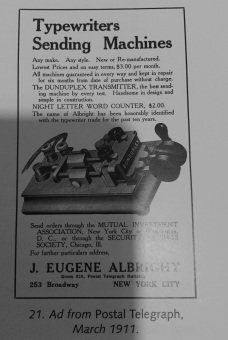 By 1914, the sole selling agent of the Vibroplex-Mecograph Company was James Eugene Albright. He had a good business in selling typewriters and the Dunduplex bug in 253 Broadway Street in New York City. As the fame of the Vibroplex bugs or speed keys rose, clones of the Vibroplex bug started to rise up in the market. Although there is no existing physical advertisement of these clone bugs, it was probably told through telegrapher through telegrapher that the clone bugs were cheaper but to have the same qualities of the genuine Vibroplex bug. The webmaster of telegraph-office, Mr Neal McEwen states that there were ads in the magazines and journals. 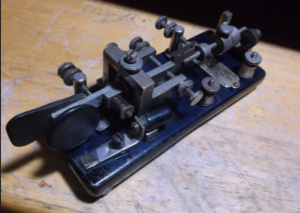 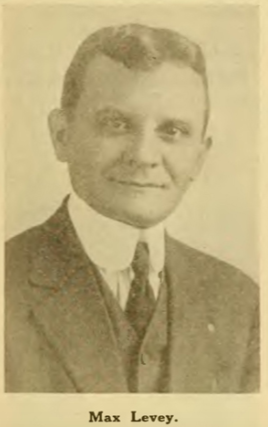 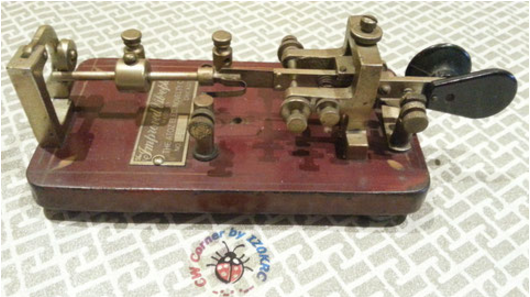 The flag patent violator of the patent wars was the ATOZ Electric Novelty Company of Chicago which was ran by Max Levey. The ATOZ Electric Novelty Company manufactured around 10,000 bugs. They have three models but their single lever was the main seller (Vibroplex original Clone), double levers and one model X was made. For more information on Max Levey, check out this cool history about Max Levey researched and written by Paul, N6EV. Click Here to go!

Most historians and people do not state this but the ATOZ Electric Novelty Company had two types of nameplates. The first nameplate were engraved this: (XXXX is a 4 digit serial number)

MADE BY ATOZ ELEC. NOV. CO 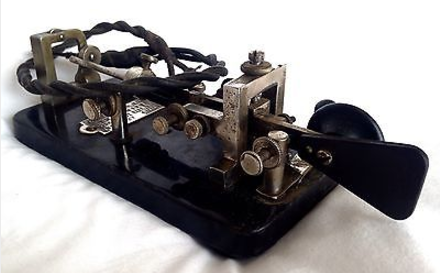 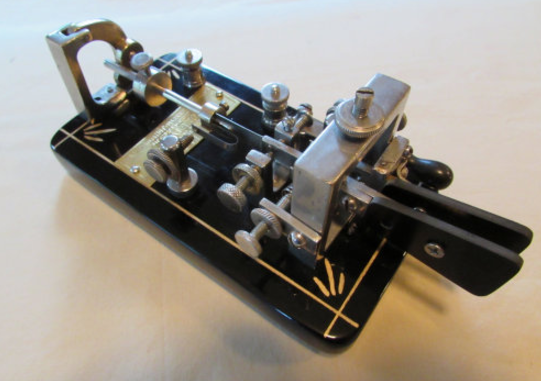 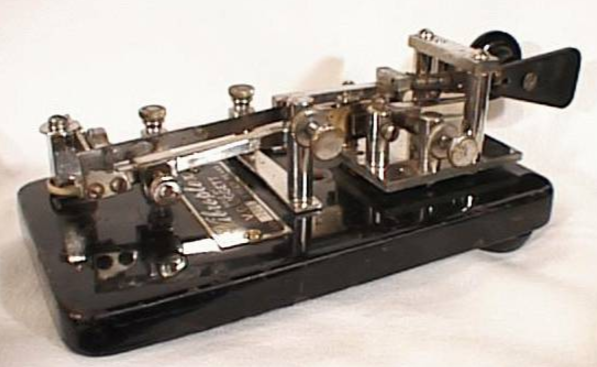 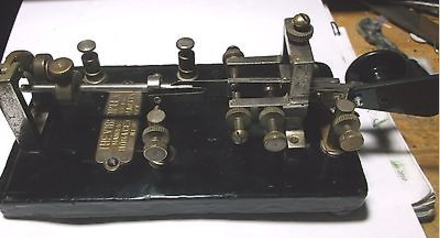 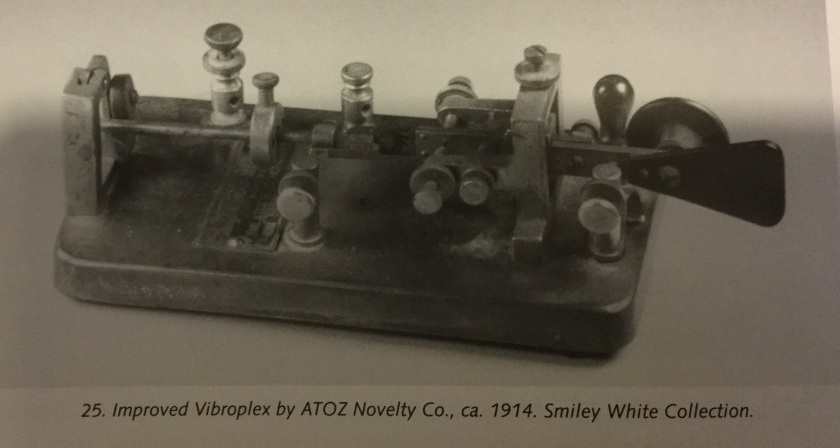 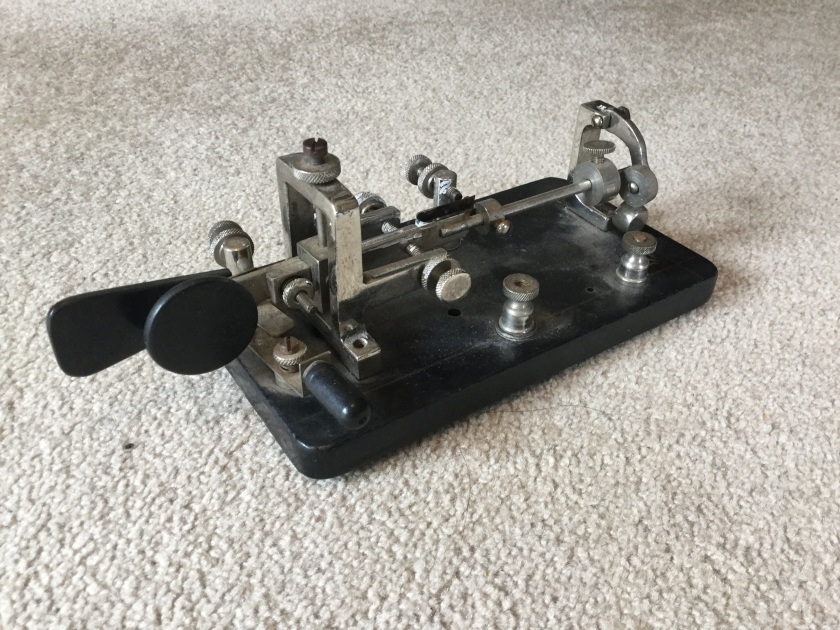 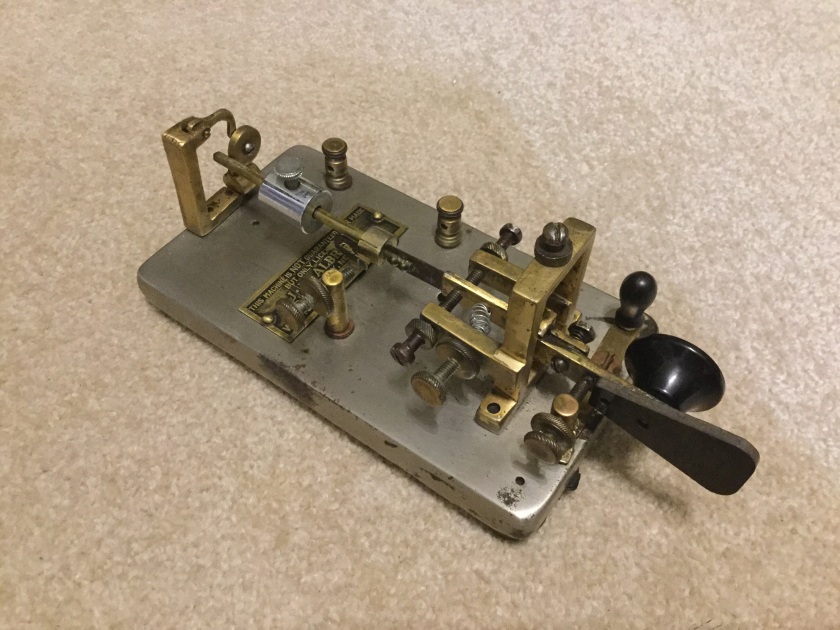 Well, Albright took action. He said that the owner of these bastard bugs (clone bug’s name until WWI) were to pay a $2.00 license fee to J.E.Albright to legalise the use of the bastard bug. Many Vibroplex Clones or most often the ATOZ bugs are found with an Albright License. Some are known to have their original nameplates. By that time there were around 10,000 clone bugs in operation in telegraph offices, so Albright issued a warning ad to the Western Union and to their telegraphers that it would be illegal to use a bastard bug if it did not have a license by Albright.

Fun Fact: Some collectors and operators of the past say some of them felt much better than the ‘real’ Martin Vibroplex.

There are two types of Albright license plates. {This field of Albright nameplates were researched by Thomas M French, W1IMQ (SK)}

This machine is NOT guaranteed NOR made

but NOT guaranteed NOR manufactured by 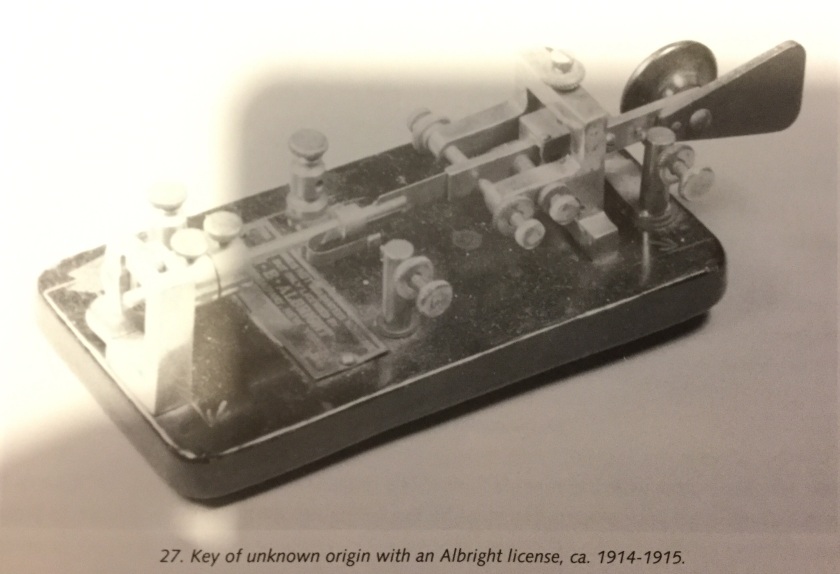 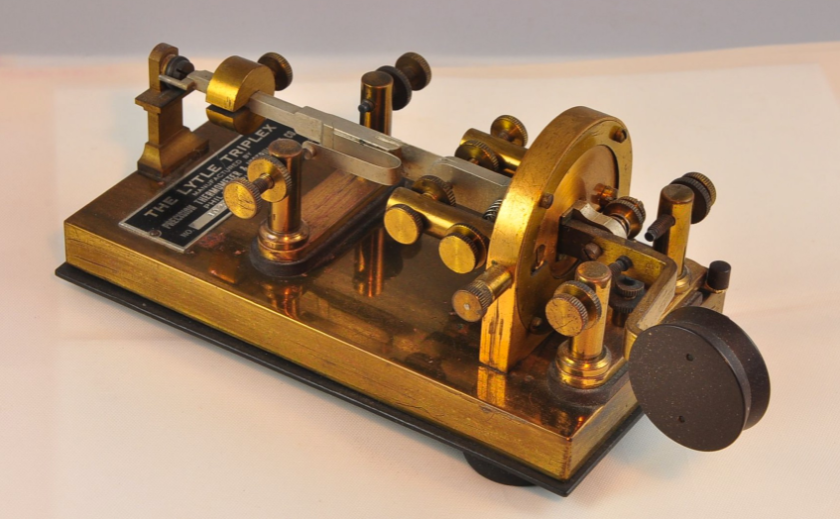 During the First World War, inspectors from the Albright Company were asked by the War Department to inspect and approve semi-automatic keys purchased by the Signal Corps for military use, to ensure efficient operating on their circuits.

When the exclusive manufacturing rights were relaxed in the early twenties, there was no longer a need for the so called, ‘Albright License’ since by then many manufacturers were producing semi-automatic keys quite regularly.

Following extract is from the ‘The Story of the Key’ Volume. I, Morse Magnificat. Written by historian, Louise Ramsey Moreau, W3WRE

One thought on “Vibroplex Patent Wars: The Rise of the Albright bugs”

I will be grateful for any donation of telegraph keys. Broken, unused and etc. J38s, Bugs, paddles, straight keys and more!